Join us December 7th for a linkedin live event! 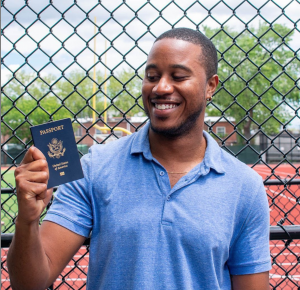 Studying abroad can be a thought-provoking, life-changing, and incredibly rewarding experience, and yet very few students of color have the financial resources to take full advantage of these opportunities.  In fact, according to a recent study by the Institute of International Education, only 6% of college students who study abroad are Black. Breakthrough alumnus, Lamar Shambley is on a mission to change that.

Shambley was introduced to Breakthrough at Norfolk Academy as a 12-year-old middle school student. During his Breakthrough summers, Shambley discovered two ardent interests that would drive him: his love for education and a fervor for new experiences.

“At Breakthrough, I realized I was just as smart as kids who had a different upbringing than me. Even though I was at a disadvantage as a minority, I knew I had to work hard and that I was more than capable,” said Shambley.

As an undergraduate at The College of William & Mary, he continued to pursue these dual preoccupations. Shambley taught math with Breakthrough Miami for three summers and became the first person in his family to leave the country, traveling to the Dominican Republic with other students on a medical service trip. “I felt the culture, the music, and I loved the Spanish language,” he recalls.  “Using it to communicate with other people helped me think about people’s stories in a global context.”

Today, Shambley continues to meld his love for education and traveling abroad. He is currently the Founder and Executive Director at Teens of Color Abroad (TOCA), which focuses on exposing students of color to global languages and culture in order to enhance their language learning experience, increase their educational outcomes and strengthen their global competency skills. In a partnership with Centro Mundolengua, TOCA students will take three hours of Spanish class daily, live with a homestay family, and participate in culturally immersive activities such as flamenco dance lessons, paella cooking workshops, museum tours, and more.  “After studying abroad, Black students are 30% more likely to graduate than their peers,” Shambley says, “so I hope that TOCA can be a bridge for students between studying abroad and completing college.”

While statistics show that the majority of students who study abroad are white and female, Shambley

continues to challenge these stereotypes by providing opportunities for students of color to study abroad and explore new languages. “Starting TOCA has been a culmination project of my academic, personal and professional life,” Shambley recalls, “and Breakthrough was absolutely foundational and fundamental in me starting this program. My goal with TOCA is to make this opportunity accessible to everyone, including teens of color. Because they deserve the world, too.”

The Breakthrough Collaborative congratulates program alumnus Lamar Shambley on his efforts. We hope many Breakthrough students will be able to participate in study abroad programs during their college years and beyond!